Often I am asked why I decided to pursue building SacreServ; I will be sharing my reasons and articulate my vision to provide a standard frame of reference to further the conversation.

To begin, we can broadly divide a fundraising campaign into five stages depicted below. 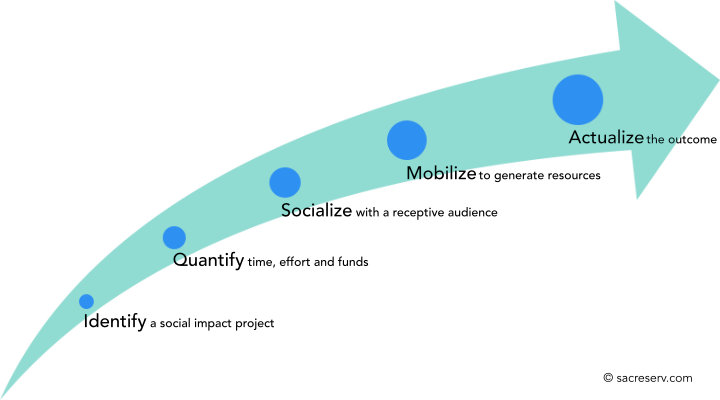 Any fundraising project typically starts with an idea or to materialize a crucial need identified by an individual or a group. This identification is the essential stepping stone which determines the success or failure of the project.

Once we identify a project, it is essential that its cost regarding time, effort and resources and its impact on the given community is rigorously measured to make a compelling case for fundraising.

Once a project has a compelling case to move forward, the success of its fundraising will depend on the breadth of support it enjoys in a given community of donors, volunteers, sponsors, and supporters.

Mobilization is the stage where the rubber meets the road, fundraising and volunteer recruiting to achieve the goals and targets established in the earlier stages.

The ultimate stage of any fundraising effort is actualization,  the hard work of turning an idea or a need to a tangible outcome. This work is the hallmark and the reason for the existence of all the nonprofits and social organizations, making a difference in the community they serve.

In my experience, many nonprofits face challenges at various stages of their fundraising efforts, which are depicted below. 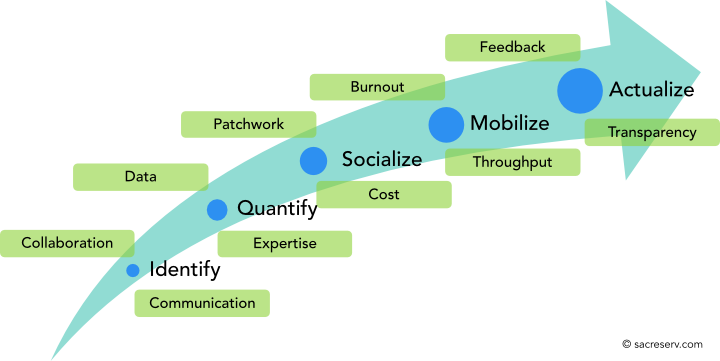 Close collaboration is key to the success for any fundraising effort, but its importance is even higher in the early stages of a project. As often such projects involve efforts and inputs from a host of stakeholders, having effective collaboration and feedback loop helps set the right direction for a project, wins over increased support and ensures long-term viability and success of the project. However many grass-roots nonprofits often face challenges and have to rely on several ad-hoc collaboration channels, which may not be as effective and impactful.

For many grassroots nonprofits (public schools, libraries etc.) often it is hard to get relevant data to project level of community outreach and participation needed to make a given project successful. Not precisely knowing what it takes to go from point X to point Y to raise funds for a given project often results in setting ambitious but unrealistic goals, in turn, resulting in lost efforts and disappointments.

Communication between various stakeholders, sponsors, donors, and volunteers often involves a patchwork of emails, phone calls,  text messages, a plethora of social networks or other traditional means.  Without an effective mechanism to coordinate communications across multiple channels, organizations may end up spending excess time and resources.

Traditionally many nonprofits use sales of food or other donated merchandise in their communities as a way to raise funds, which may have its place in some circumstances, but it can not be a reliable source of fundraising. Many such campaigns I have personally witnessed didn’t even produce enough funds to break even the time and resources invested by the volunteers running these campaigns. This sort of experience can often result in lost enthusiasm and burnout for supporters of a given nonprofit.

A patchwork of Channels for Fundraising

Nonprofits may receive funds through multiple channels; cash, check, credit card and several online donation platforms. Many of these channels require significant costs and administrative workload like accounting for these funds and providing receipts/letters to donors for tax-filing purposes among many others.

There’re numerous platforms which already provide reviews and ratings for the various charitable organizations concerning their effectiveness and cost efficiency on delivering to their mission. Most of these reviews are based on regulatory filings by these nonprofits and may not truly reflect the input and feedback from the community members who work closely with the nonprofit. Donors and volunteers are more likely to engage with nonprofits if they’re able to see for themselves the results produced by the nonprofit in their community.

I know it is quite a lot of material for my first blog post here, but I wanted to put it out there so that we can use this to drive further discussions. I will also use this as a foundation to outline my vision for building SacreServ and how it can prove to be an effective way for community-based fundraising.